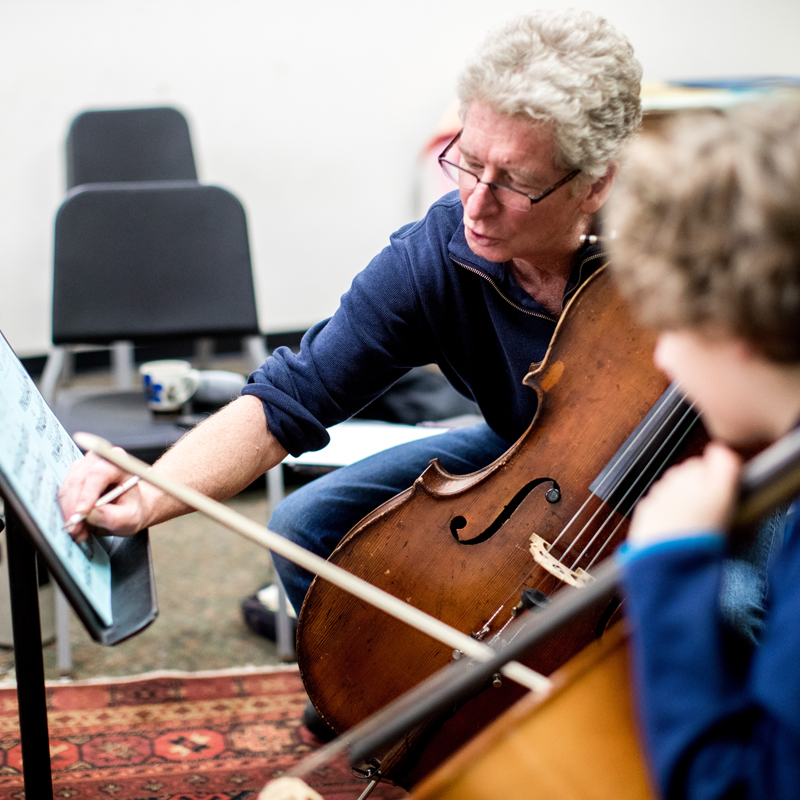 Chris White is a classical, jazz and improvisational cellist and teacher based in Ithaca, NY. He has performed and taught around the U.S., and in Canada, Europe and North Africa. Chris has several solo recordings and has played on numerous recordings of other artists including Jody Kessler, Joe Crookston, Scott Adams, Javier Ruibal and others. He performed with his jazz quartet at The First World Cello Congress (June 1988), The Quanzaine de Montreal (April 1992), the New Directions Cello Festival (1995, 1997, 2001 & 2010) and at the 6th American Cello Congress in Maryland (May 2001). White has been a member of the Binghamton Philharmonic since 1997 and often free-lances with chamber and jazz groups. Chris has been a CSMA faculty member for many years and also maintains a private studio and gives workshops on improvisation for cellists.

Chris has published a jazz book and CD series for string instruments called Jazz Cello, Jazz Viola and Jazz Violin and has authored articles in national string (Strings) and jazz magazines (downbeat). His CD First Principles features his own compositions as well as originals by the pianist Eric Hangen. The group called Chris White and the Cayuga Jazz Ensemble consists of cello, trumpet, piano, bass, and drums. White is also the founder and director of the international New Directions Cello Association and Festival, now in its 24th year. www.newdirectionscello.org

Another new direction that White has taken in recent years is playing with silent films on acoustic and electric cello with effects and looping. For several years he performed solo with the 1919 German film “The Cabinet of Dr. Caligari” at Ithaca College. Since 2008 White has collaborated with singer and multi-instrumentalist Peter Dodge and soundscape guitarist/composer Robby Aceto as part of the Finger Lakes Environmental Film Festival (FLEFF) and other silent film showings, performing live improvised soundtracks with a variety of important silent films. Their group, Cloud Chamber Orchestra, released a CD in June 2012 titled “GRASS” featuring the music they recorded live for the silent film by the same name at the 2008 FLEFF. Cloud has created live improvised soundtracks for 6 silent films, 4 for FLEFF and two for the Ithaca Motion Picture Project.